Researchers agreed that 3,500 BC is the year when the wheel was invented, which is more of a ballpark than an exact year. The place is Mesopotamia, the area now occupied by war-ravaged Iraq. The first wheel for transportation purposes is approximated to 3200 BC, its purpose being to move the Mesopotamian chariots. To be completely historic, as noted here, the very beginning of the wheel goes back to the Paleolithic era (15,000 to 750,000 years ago).
The first iron rims around the wheel were seen on Celtic chariots in 1000 BC. The spoked wheel remained pretty much the same until 1802, when G.F. Bauer registered a patent for the first wire tension spoke. This wire spoke consisted of a length of wire threaded through the rim of the wheel and secured at both ends to the hub. Over the next few years, this wire spoke evolved into the round tension spoke we see on bicycles today.
Another major invention that came about the same with the wire tension spoke was the pneumatic tire, which was first patented in 1845 by R.W. Thompson. His idea was further improved in 1888 by John Dunlop, a Scottish veterinarian, who also patented it. Thanks to the smooth ride, Dunlop’s tire replaced the hard rubber used by all bicycles at that time.
It’s fair to start talking about automobile wheels starting with Karl Benz’s 1885 Benz Patent Motorwagen. The three-wheel vehicle used bicycle-like wire wheels, which were fitted with hard rubber.
Speaking of rubber, the first people who thought about using it for automobile purposes were André and Edouard Michelin, who later founded the famous tire company. In 1910, the B.F. Goodrich Company invented longer life tires by adding carbon to the rubber.
WHEEL OF OREO 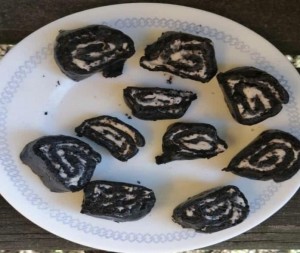