To be honest, I´m not completely sure. Actually, we were first going to make a Gollum from Lord Of The Rings, but on the day we decided that was just mad, impossible to construct. Also we didn´t have any food coloring that suited Gollum´s sickly skin tone. But we figured Jabba was crazy enough.

We were really looking forward to meeting up for this, we both like star Wars and Lotr and stuff, we´ve had it planned since the beginning of April.

Both options were my idea though. The actual baking was eventful.

I suppose technically speaking it belongs to science fiction but sci-fi has a lot in common with fantasy, right? Hopefully that´s fine. 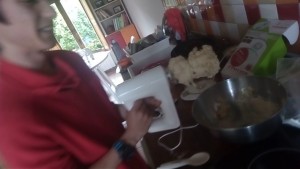 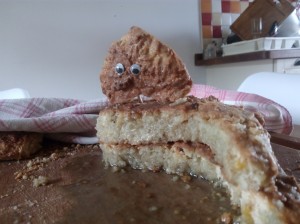 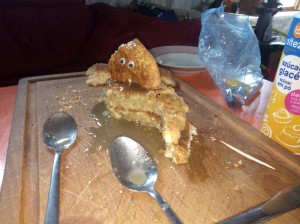 Recipe
The original recipe had eggs instead of butter HOWEVER we couldn´t find them- I thought they´d been used the night before in an omelette. Turns out they were right in front of me the whole time.
Ingredients:

It was good fun .Again, this is what it should´ve looked like.