I’ve chosen Lacrosse as the sport for this activity. I’ve recently discovered it, and it’s a very interesting sport: There’re two teams, each of them with 10 players, and each of the players has a stick with a net on the top. The player has to catch the ball (which is about the size of a baseball ball) and take it with the net to the other’s team goal. It’s sad there’re only teams of Lacrosse in Spain in big cities like Madrid or Barcelona, because I would totally try it!
It doesn’t have much to do with this recipe, but these are two things I really want to try one day.
SARA BARCONS
Vegan chocolate, cherry & honeycomb parfait 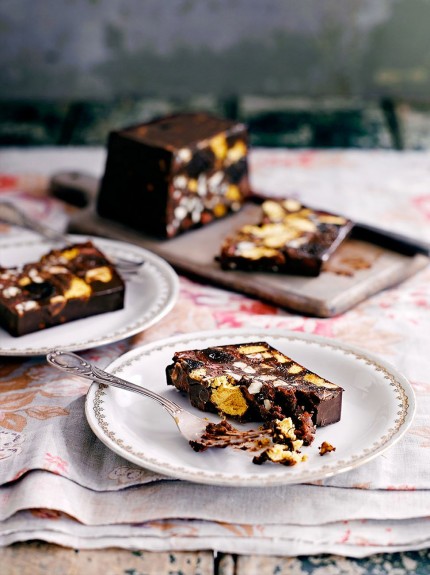 Method
1. Begin by making the honeycomb. Generously grease a baking tray with vegetable oil. Melt the granulated sugar and golden syrup in a high-sided saucepan over a low heat. Once melted, turn up the heat a little and bubble the syrup until it turns to a rich, caramel gold colour.
2. Whisk in the bicarbonate of soda. The syrup will foam up – immediately pour it onto your greased baking tray. Set the tray aside and leave it to cool for 20 minutes. Slide the honeycomb off the tray and roughly chop it up.
3. Line a 450g loaf tin with enough cling film to allow it to drape over the sides by about 7–8cm, smoothing the cling film into the tin to form a crease-free surface. Break up the dark chocolate and roughly chop the almonds. Place the chocolate and margarine in a heatproof bowl over a pan of simmering water, stir together until melted and combined to a smooth and glossy finish.
4. Take the bowl off the heat and stir in the chopped honeycomb, almonds, cherries and cranberries. Spoon the mixture into the lined tin and level the top. Fold the overhanging cling film loosely over the parfait then freeze for 1 hour.
5. Remove from the freezer and transfer the parfait to the fridge until completely set. Once you’re ready to serve, carefully lift the parfait from the tin, unwrap the cling film and cut into 2cm slices.